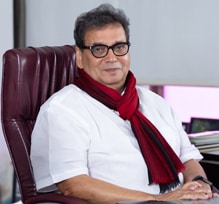 We endeavour to train the students in a way that makes them employable and industry-ready.

Subhash Ghai started his career in Hindi cinema as an actor in Taqdeer (1967) and Aradhana (1970) with lead roles during the 70s in Umang, Sherni, Bharat Ke Shaheed and Gumraah. He wrote his first film in 1973 and sold various stories and scripts to leading directors like Prakash Mehra and Dulal Guha in partnership with B Bhalla.

His directorial debut was with the film Kalicharan (1975), which was also written by him and starred Shatrughan Sinha and Reena Roy which became a blockbuster instantly. After directing three films, Vishwanath [1976], Gautam Govinda [1977], and Krodhi [1979], he ventured into production with Karz [1980] being his first film as a producer.

He formed his own company Mukta Arts Pvt Ltd. after directing Vidhata [1982], his first film with Dilip Kumar and Sanjay Dutt. Under the Mukta banner, he made the evergreen musical blockbuster ‘Hero’ introducing Jackie Shroff which was followed by many blockbusters in a row including Meri Jung, Karma, Ram Lakhan, Saudagar, Khalnayak, Pardes, Taal, Yaadein until 2001. Then came Kisna [2004], Black and White [2007] and Yuvraaj [2008]. He also produced many blockbusters including Aitraaz, 36 China Town, Apna Sapna Money Money, Joggers Park and Iqbal. He also produced regional films like ‘Nauka Dubi’ in Bengali, ‘Sanai Choughade’ and ‘Samhita’ in Marathi and ‘Double Di Trouble’ in Punjabi.

He is known to give brief cameos in his directorial ventures. During the 90s, the media honoured him with the title of ‘Showman’. This title was previously bestowed to Raj Kapoor known for his big musical movies and celebrations with magnum events.

Both Pardes and Taal were released internationally and featured in the top 20 movies in the US box office charts for several weeks.

As a producer, he introduced the concept of the film insurance policy for the first time in Bollywood, with his film Taal. He was also the first producer to get banks to finance movies. He was the first Indian film producer who converted his company into a corporate entity in 2000, as Mukta Arts Pvt Ltd., and expanded its business from education to exhibition in movies and multi-media.

Being a technology enthusiast himself, he promptly promoted new technology in both production and exhibition sectors.

As a director-producer, he launched and groomed many upcoming and new faces in the industry like Madhuri Dixit, Manisha Koirala, Jackie Shroff, Sanjay Dutt, Mahima Chowdhary, Aishwarya Rai, Kareena Kapoor and Katrina Kaif.

He has been known as one of the best directors in extracting great music from various composers, and acting performances from each and every actor he has worked with. His past films still yield huge revenue through television and remakes.

Recipient of many national and international awards, Subhash Ghai has been honoured by the United States Senate. He was the former chairman of the entertainment committee of the trade body CII, and a member of FICCI, NASSCOM and TIE global & its alliances. He has been on the jury of the Emmy awards for three years, and on the international panel on film piracy at the Cannes Film Festival in 2008.

In the recent past, the United Kingdom and South Africa have sought his expertise to help set up institutions. Under his able mentorship, the WWI teams have also helped the Hong Kong government to promote tourism in their country. In December 2013, the international confederation of NGOs and the United Nations conferred the Karmaveer Chakra upon him for his contribution as an educationist to develop skill and innovative education in India in the field of cinema and entertainment.

The internationally acclaimed song ‘Jai Ho’ was to be a part of his film Yuvraaj [2008], but Mr. Ghai felt it was unsuitable for the character played by Zayed Khan to perform this song on-screen. Later, it was used in Slumdog Millionaire. After winning the Oscar, A. R. Rahman revealed in an interview that it was Mr. Ghai who had asked him to use the words ‘Jai Ho’ in the song.

He directed a short film on communal harmony in 1990 with Ranbir Kapoor, Sonam Kapoor, Tiger Shroff titled ‘Pyar Ki Ganga Bahe’ – which was the title of a song composed by Laxmikant Pyarelal on the lyrics of Javed Akhtar.

He conceived and directed a magnum audio-visual stage show ‘Cinema Cinema’ in 1991, celebrating 100 years of world cinema with 42 Bollywood stars, 200 musicians, and 250 dancers on a 180 feet stage at NSCI, Mumbai.

His production house is named after his wife Mukta Rehana Ghai. They have two daughters, Meghna and Muskaan. Subhash Ghai is chairman of Mukta Arts Pvt. Ltd. and Whistling Woods International.

Today, his evergreen films ‘Hero’ and ‘Ram Lakhan’ are being remade by Salman Khan and Karan Johar with Rohit Shetty as director, in association with Mukta Arts Pvt. Ltd. 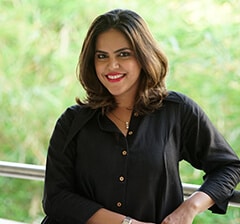 Whistling Woods International is a platform for self-expression and self-realisation. It’s a platform to realise your dream.

Meghna Ghai Puri possesses a B.Sc. Honours in Business Management from Kings College, London, and a Post Graduate Diploma in Communications, Advertising & Marketing from the CAM Foundation, London. Meghna returned to India after a brief work stint at CDguru.com. Her mission is to fulfil her father’s vision to build the best film school in the world. She was involved in every aspect of building Whistling Woods International ever since its inception.

Meghna also spearheaded the marketing activities at Mukta Arts Ltd. ‘Taal’, ‘Pardes’ & ‘Yaadein’ are some of the prominent projects that she led. Her deep connections in the film industry ensure that the best minds are selected to mentor the students of Whistling Woods International. She has warranted that almost every establishment scouting for talent in the Media and Entertainment Industry turns to Whistling Woods International for answers. 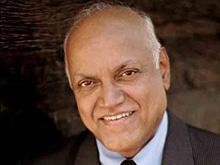 Manmohan Shetty is a revered media veteran who thrives on innovative initiatives to satisfy his simple penchant for thrill. From the founding of Adlabs Films Ltd., to the conceptualization of his new project – Adlabs Imagica, his motive has always been to create something novel; to challenge what has been written off as impossible and bravely explore unknown territory.

A maverick entertainer, Mr. Shetty founded his first company, Adlabs Films Ltd., as an advertising film processing company in 1976. Soon, the firm ventured into feature film processing by setting up a state-of-the-art laboratory in Film City, Mumbai. At that time, this laboratory processed 80% of the films in the Hindi film industry. His interest in content-rich cinema impelled him to pursue the production of films like Ardh Satya, Chakra, Hip Hip Hurray and Holi amongst others. Adlabs Films Ltd. went on to win the National Award several times for their technical contribution to Indian cinema.

Through his vision and passion, the year 2000 saw the launch of Adlabs multiplex and the launch of India’s first and world’s largest IMAX Dome theatre in India. With an intention to specialize in film production and content, a new organization called Entertainment One was formed. Twenty blockbuster films, including Gangajal, Apaharan, Bluffmaster, Waqt, Marigold, Sarkar Raj and Munnabhai MBBS were created under this banner.

Mr. Shetty has been the Chairman of National Film Development Corporation of India, and President of Film & Television Producers Guild of India. 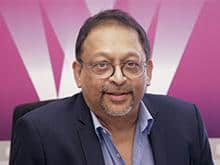 Pradeep Guha is a stalwart in the field of media, advertising, marketing and branding. For over 35 years, he has been a pioneer of change and progress for the brands that he has been associated with. In the mid-70s, he served as the President and Director of the Times Group. He was instrumental in building the group’s flagship brand, The Times of India, and magazines like Filmfare and Femina. In his 29 years long association with the print medium, he has pioneered trends in media marketing with a brand-oriented sales approach, focusing on adding value and increasing volume.

In 2005, he took over as the CEO of India’s largest satellite broadcasting network, Zee Entertainment Enterprises Ltd., where he helped the channel reclaim its erstwhile position of prominence in the Indian television arena.

In 2008, Mr. Guha joined 9X Media Pvt. Ltd. as Managing Director. During his tenure, the formerly debt-ridden company not only saw a growth in revenue but also launched four new music channels.

Mr. Guha is associated with many bodies in the field of advertising, marketing and media. It was due to his initiative that India got empanelled at the Cannes Advertising Festival. He serves as India’s official representative to the Asian Federation of Advertising Associations and is the current Chairman of the Federation. 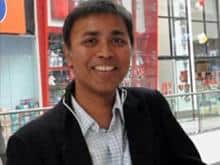 A Chartered Accountant and Bachelor in General Law by qualification, Vijay Choraria has over 25 years of experience and has been actively involved in the real estate and financial markets.

He is the Managing Director of Sharyans Resources Limited since September 1, 2007 and the Promoter & MD of Prebon Yamane (India) Ltd. He served as the Chairman of the Board of JMC Projects (India) Ltd., until December 11, 2008. He has been a Non-Executive Director of Mukta Arts Ltd since March 24, 2000.