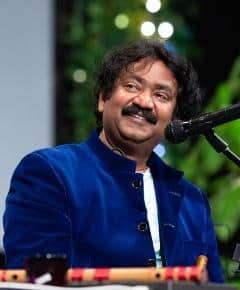 From playing music in churches at his birthplace-Visakhapatnam to being a globally celebrated flautist, Naveen Kumar walks down the memory lane at the 5th Veda session, hosted by WWI

The Indian flautist, music composer and singer, Naveen Kumar is globally admired for his excellence in playing a varied range of flutes. Besides being a recording artist and a music producer in the Hindi, Telugu and Tamil film industry, Naveen has also had long association with the music maestro – A.R. Rahman. For the unique talent and humble heart he possess, WWI was thrilled to invite this music-genius to share his expertise at the 5th Veda session.

Playing the song ‘Dil Hai Chota Sa’, Naveen Kumar made a melodious entry to the session and created a musical ethos. In a heart-to-heart conversation with Subhash Ghai, the celebrated flautist shared his journey in the field of music and narrated stories about his collaborations with legendary musicians like Shankar, Ehsaan & Loy, Salim-Sulaiman and Pritam Chakraborty, among others.

Reminiscing memories about the connection that led him to play the flute, Naveen said, “I got an opportunity to play the flute in one of my school functions. And since my dad played the flute, he helped me in preparing for it.” Further explaining his love for the music instrument, he added, “For me, I enjoy the noise which comes out of it. Though I don’t have words but flute has a feel and soul in it.”

Further, in the session, the talented artist spoke about the inception of ‘The Naveen Flute’. He said. “I was practising in one of the studios and I heard the strings of other instruments reacting to the music created from my flute. So now I have inserted a few strings in my flute too and I am still trying to make the best version of the Naveen Flute.”

In addition to imparting insightful knowledge, Naveen also played various flutes for students and explained the technicalities involved in each one of them. He played Hulsi- Chinese, Von Ton flute- Middle East, Ullas- Switzerland, Sakhu Haji-Japanese, Rave Drums-Russia, and Glass flute -created by himself. Giving inputs about the present day innovations in the field, the exemplary artist shared details about ‘flutronixs’- a contemporary fusion of techno music with flute.

The session then opened to a Q&A round where the students asked a few questions and attained further knowledge about music from the legendary flautist. As a departing word of advice for aspiring music enthusiasts Naveen said, “Be a singer or a composer, the music should come from inside. Put your best, practise hard and take this subject very seriously. Also, remember to learn the basics, it is extremely important.”

With a burst of applause and a standing ovation, Naveen Kumar was felicitated with a token of appreciation by Sangeeta Shankar- HOD, WWI-School of Music