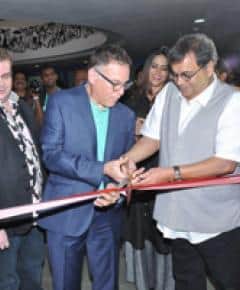 YouTube™ officially unveiled the YouTube Space Mumbai at Whistling Woods International (WWI). YouTube Space Mumbai is a state-of-the-art collaboration and production facility for YouTube video creators, located at one of Asia’s top film schools. The Space will allow YouTube creators and students at WWI to learn about video production, collaborate with other creators, and give them the tools they need to realize their creative goals.

Located in the heart of Mumbai’s film and television production hub Filmcity at renowned film school Whistling Woods International, YouTube Space Mumbai is the latest to open after YouTube Spaces in Tokyo, Los Angeles, London, New York, São Paulo, Berlin, and Paris. The facilities are designed to help remove constraints on resources in order to give creators the opportunity to learn, connect, and create. Through YouTube Space, creators can access, at no charge, all the latest audiovisual and editing equipment to produce original and innovative digital video content for their own YouTube channels.

The Indian YouTube creator community is one of the world’s most vibrant, and in the past year alone, the amount of content uploaded to YouTube in India has grown by 90%, while watch time in India has grown 80% year on year. To support this incredible community of YouTube creators as well as the next generation of Indian talent, YouTube and Whistling Woods International are excited to be partnering together on this project.

The launch event featured a performance from Indian creator Aakash Gandhi, pianist and composer and founder of 88 Keys to Euphoria, and his collaborators Ash King and Shashaa Tirupati. Their latest video, “Billie Jean | Jiya Re (Mashup Cover)”, which opened the event and was released on YouTube, was shot entirely on campus and is the first official production of the YouTube Space Mumbai. Other speakers included Lance Podell, Global Head of YouTube Spaces; Ajay Vidyasagar, Regional Director of YouTube Partnerships for India and Southeast Asia; Founder and Chairman of Whistling Woods International Subhash Ghai; and David Macdonald, Head of YouTube Spaces, Asia Pacific.

Lance Podell, Director, Global Head of YouTube Spaces, said, “The new YouTube Space Mumbai at Whistling Woods International marks the latest milestone in our efforts to support the incredible wave of creativity we have seen develop in the Indian YouTube creator community over the last few years. We’re excited and proud to be partnering with a premier institution like WWI, who are truly industry torchbearers in their commitment to their students and quality programming. By working with them, we hope to empower India’s next generation of digital creators and WWI students to learn, connect, and to create new content. We look forward to seeing what video content will emerge from the Space and the community it fosters.”

Subhash Ghai, Founder and Chairman of Whistling Woods International, said, “Without doubt, digital platforms are the present and future of content creation and consumption in India. We, at Whistling Woods have always endeavoured to bring the future to today’s film and media industry and, by partnering with one of the largest and most respected companies in the world to set up the YouTube Space Mumbai, we have just taken another big step towards making India the content creation powerhouse that it deserves to be.”

In addition to physical studio space that is available to students and creators free of charge, YouTube and WWI are developing original courses to train the next generation of Indian filmmakers to succeed on digital and online media. Leveraging material from the YouTube Creator Academy and developed in tandem with YouTube staff, Whistling Woods has already launched its first course for YouTube with 120 students from their undergraduate and graduate schools.

Since the first YouTube Space opened in 2012, more than 150,000 creators have visited the Spaces globally, creating over 10,000 videos from their visits. Videos created at YouTube Spaces worldwide have amassed 1.25 billion views thus far.