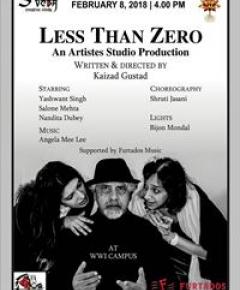 “Yashwant Singh is one of the finest actors on stage”, said Subhash Ghai after witnessing a new stage play ‘Less Than Zero’ at Whistling Woods Auditorium

Is there always a silver lining at the end of the tunnel? Twice the half of two and a half is still two and a half, or is it? “LESS THAN ZERO in its simplest form is not less than any big stage play performed anywhere in India”, said Ravi Gupta, Dean, Whistling Woods International (WWI). It’s entertaining yet thought-provoking take on religion, government, corruption, politics, and love helped the audience see daily struggles with a different perspective.

Written and directed by filmmaker Kaizad Gustad ‘LESS THAN ZERO’ was staged at the 5th Veda auditorium for students of Whistling Woods International at the Filmcity campus. Whistling Woods International is a world-class institution with eight schools under its creative umbrella, namely, School of Filmmaking, Animation, Actors’ Studio, School of Media & Communication, Fashion, Visual Communication Design, Music & Virtual Academy. 5th Veda is a cultural Hub initiated by Subhash Ghai to develop the creative skills of the students by conducting weekly interactions with masters and legends through workshops about various art and creative crafts.

Post the play was staged and the lead cast including Yashwant Singh, Salone Mehta and Nandita Dubey performed brilliantly, an interactive session between the students of Whistling Woods International and the entire team of Less Than Zero followed, where the director and actors shared their experience of making the play.

While interacting with the students, Kaizad Gustad, shared his experience of directing a play for the first time. He said, “Theatre is the most liberating and creative form of art. It is an actor’s medium and helps them come alive on the stage. A play can be staged anywhere and the best part about it is that there is an immediate feedback received from the viewers.”

Actor Yashwant Singh who got a standing ovation post his 75-minutes long performance without a break said, “I felt liberated as an actor during the entire process of this play. It is the way I could relate to the script, is what still keeps me involved in playing my character Zero.” While answering one of the questions from the intrigued WWI students, he emphasized on how it is an actor’s take on things and real-life experiences that makes an actor sharpen their acting abilities. He further shared, “You have to be in love with the script in order to do justice to the character.”

Actor Nandita Dubey who played the part of Ziza shared, “In order to understand the subtext of any play, you have to keep reading the script.” Her advice to the students, “You should be able to see your flaws and create your own reality. Be brave and let it all go.”

Salone Mehta played the part of Zoe and highlighted, “The tiny details in the script were said in a big and relatable way, which made me fall in love with the script. She further added, “An actor should live their lives to the fullest.”

The students of WWI were mesmerized by the ‘organic and experimental’ route that was adopted to present the play. Overwhelmed with the performance Subhash Ghai expressed, “This play kept me engrossed for the entire time and I was completely awestruck by the performances put together by the team.”

Concluding the session, Kaizad Gustad and his team of ‘Less Than Zero’ were bestowed with a token of appreciation by Subhash Ghai amidst a standing ovation by the students of Whistling Woods International.