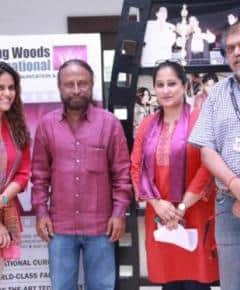 “In animation you can turn the impossible into possible and make your dreams come true”, said Ketan Mehta

300 students of Whistling Woods International (WWI) had the most exciting experience while a few drew some basic shapes on the screen and Ketan Mehta’s team turned them into some of the most fascinating animated characters . It was one of the highlights of the interactive session with National award winning filmmaker Ketan Mehta on the Art and Technique of Animation and its future in cinema. The session was conducted as part of the 5th VEDA – a cultural hub initiated by Subhash Ghai and WWI to develop the artistic skills of the students of every discipline.

The student team of 5th VEDA introduced the ‘Evolution of Animation’ since 1900 till date with an AV, presenting new facts.

“There is no limit to the power of animation, so try not to contain your creativity,” said Ketan Mehta, a pioneer of Animation industry in India. He charmed the students of WWI with illustrations and demonstrations interspersed with his film clips made at his MAYA Digital Studio, the first animation studio of India since 1996.

He was highly impressed by the student’s animation films ‘BEJINXED’ and ‘FLIGHT OF DESIRES’, which was specially screened for him. He awarded them with the DVD of his animated film ‘Ramayana – the Epic’, produced by him as a token of appreciation and revealed that the future of cinema is animation and CGI movies.

Ketan Mehta appreciated Subhash Ghai for taking such an initiative for the students, who are fortunate to have these kind of activities to develop their skills at campus. He encouraged the students who are inclined towards the art of animation to start now, as it is an incredible time to begin a career as an animator and take the paths less travelled.

“We are in a constant digitally evolving world”, he stated, entering the Golden Age of Animation in India, with gaming, commercials, television and internet offering countless opportunities for expression. He also mentioned how the focus has shifted towards the digital market due to its great demand, which has led to numerous initiatives being taken by the government and corporate sector. He also said, “Animation is like an exciting journey which puts life in an inanimate thing, therefore turning an impossible thing into possible.”