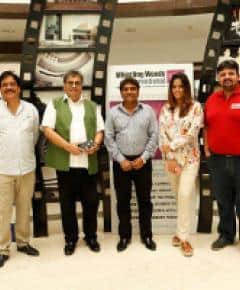 “LEARNING IS A NON-STOP PROCESS, WHICH CONTINUES FOREVER”, SAID THE KING OF COMEDY, JOHNY LEVER AT THE FINALE EVENING OF 5TH VEDA – SEASON 2 AT WHISTLING WOODS INTERNATIONAL Mumbai

Whistling Woods International (WWI)’s 5th VEDA cultural hub wrapped up its Season 2 with a terrific stand-up act by none other than the man with a funny bone, Johny Lever. He left a crowd of 500 students in split with his performance. 5th Veda the cultural hub was initiated by Subhash Ghai, Founder & Chairman, WWIto develop the artistic skills of budding filmmakers and media students. The evening started with a short yet enlightingAV made by the 5th Veda team on the origin of comedy, stand-up acts and the best comedians from across the world and India. Thereafter, Johny Lever took over the stage and the audience went on a laughter spree till the session came to a close. He started interacting with the students by sharing his journey so far, humorously enacting every stage of his life. Popularly known as the King of Comedy, he applauded Subhash Ghai for setting up a beautiful institute like WWI for the upcoming generation. Encouraging the students, he said “You are very fortunate to have a chance to study at such a great place of learning. I thank Subhashji for establishing this institute and people will remember this innovative gesture of yours for years to come.” Taking his act forward, he also shared how he grew up in an environment where dance, music and festivity was part and parcel of life, which evolved the talent in him. And as years passed by, this talent turned into profession took him places he never imagined about. While sharing his experience about entering the film industry, he said “I started working in 1980. In 1992, while filming for Baazigar, I heard someone appreciate my acting skills. It took me 12 years to be recognized… Since then, till date, life is all about learning for me, every day.” Johny Lever’s very presence on the stage created a riot of laughter amidst the audience. The fun-filled finale evening of the 5th Veda session came to a close on an emotional note, leaving the audience thinking about the message he subtly shared through this comedy. Meghna Ghai Puri, President, WWI thanked Johny Lever for gracing the evening and Subhash Ghai, Founder & Chairman, WWI, felicitated him with the WWI trophy amid a thunder of applause.