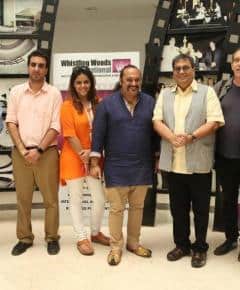 Music composer of Disney India’s Broadway musical, Beauty & Beast, which is the talk of the town and veteran singer-composer of Colonial Cousins fame, Lesle Lewis, left 400 students thrilled at Whistling Woods International. He conducted an amazing musical workshop on the ‘Art of Music Composition’ and gave the audience a taste of varied music flavours with his magical compositions.

The 5th VEDA event began with an audio visual on spirituality followed by an audio visual on the music compositions, enlightening students about various techniques and music productions. Post which the students impressed Lesle and the audience with a gripping musical piece that started with a soulful rhythm moving on to faster beats.

Lesle, a music composer and a performer is one of the very first Indian composers to have introduced the Indian audiences to Rock and Pop music. Students swayed as he performed his seemingly endless symphonies. He shared insights on his various compositions, his experience at the Coke Studio & also imparted knowledge to students who aspire to be successful music composers. He stated that one has to figure the kind of music that has influenced them since childhood, because only when one loves what one is doing can one get the best out of it.

He mentioned that a ‘guru’ is the most crucial person in one’s life who directs one’s steps. “First thing you should do in the morning is pray and thank God because you are in the best place. WWI is the best guiding light you could have” said Lesle while interacting with the students of WWI. On student’s request, he performed songs like ‘Are Yaaron’ & ‘Kai Zhala’. The students overwhelmingly supported every performance of his by singing along and clapping as per the beats.

Lesle was extremely glad to be present at WWI and said it was an honour to be with Subhash Ghai, the founder of WWI and amongst the students who are the future of the country. The event ended with a vote of thanks by Rahul Puri, Head – Academics, WWI. The event came to a close with Subhash Ghai felicitating Lesle with the 5th Veda trophy.