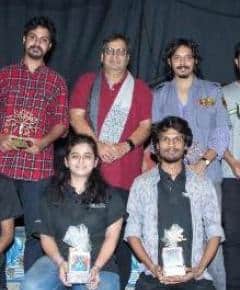 Subhash Ghai highly applauded the mono act play ‘Bhanvar’, on the psychology of a watchman, acted & written by Shivraj and Virajas staged at the 5th Veda session at Whistling Woods campus this week

What does experimental theatre mean? Can less preparedness be packaged as experimental theatre and win accolades and hearts of millions? The answer is in the affirmative! ‘Clarity in the thought process owing to sound education’ highlighted Whistling Woods International (WWI) alumnus, Virajas Kulkarni, as the underlining factor for directing and scriptwriting. His associate Shivraj Waichal, co-author, director and actor of the unique yet relatable play ‘Bhanvar’ agreed on the same.

Students of the Actors’ Studio and Drama Society of WWI witnessed an absorbing session of drama making – from conceptualisation to execution. The talented duo – Virajas and Shivraj thoroughly enjoyed staging the act and interacting with the students, to give them a preview into the world of theatre.

‘Bhanvar’ is the story of a lonely night watchman’s never-ending last shift. As Bhanvar Singh stands guard outside an empty factory for a shift that only gets longer, his principle of never sleeping on the job starts to affect his mental well-being. As the play progresses, the line between real and hallucinations start to fade, leaving a character study of a simple man from a remote village trying and failing at dreaming big.

While interacting with the students, the duo shared their experience of making the play – how they conceptualised the play within a week’s time for the Solo Theatre Festival at Pune. The idea behind the story was to showcase one of the poignant human characteristic – loneliness, in a realistic way. They made a conscious effort to incorporate the nuances of multiple caste-dominated social layers and their typical characteristics too. While Shivraj stressed on honing his acting skills by undergoing various acting workshops and real-time research on the characters, Virajas attributed his skills to the Scriptwriting course that he underwent at WWI.

The students of WWI were deeply motivated by the ‘experimental’ route to present the play that the team has adopted. While commenting on the usage of jibberish language, he cited how it added a fun element to the otherwise serious play. Anecdotes by Virajas and Shivraj, such as last-minute changes in the script, learning through trial and error helped the students understand that everyone must create their own USP to make a mark in the domain. Virajas also added that “Our brain is like a factory. We all should revisit our grievances time to time and try to incorporate and address those emotions through our work. We have tried to do that through this play and I am extremely grateful to WWI for providing us the opportunity to showcase our work at the coveted platform of 5th Veda.”

Overwhelmed with the performance of the talented duo, Subhash Ghai expressed his feeling with only one word, that is “Excellent!” He motivated the students by adding, “One should always think out of the box and have a clear direction in place.”

Concluding the session, Meghna Ghai Puri, President WWI said, “You can convey the deepest human emotions through simple art forms like drama, theatre or play. Virajas and Shivraj have portrayed that with utmost élan. With no budget, they created something so substantial, it is very credible of them. This play is not only about the central character Bhanvar Singh, but everyone can connect to it as we all must deal with issues in our lives at some point in time. WWI is really proud to have an alumnus like Virajas and it’s a joyous occasion for us to host him for the 5th Veda session.”

Virajas and his team were bestowed with a token of appreciation by Subhash Ghai who requested them to visit the campus again and share their real-time experiences with the students.