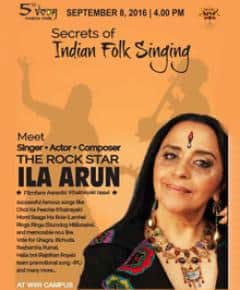 “Connect to your own roots and do not ape others”, advised Ila Arun at Whistling Woods International’s spellbinding 5th Veda cultural workshop

Ila Arun, the versatile folk singer, artist and music composer, like several guests in the past, enthralled the students at Whistling Woods international’s (WWI) 5th Veda session with her singing and dance moves and super-energetic persona and passion for music and dance. The weekly cultural workshop and hub, organised by the institute, was moderated by Subhash Ghai, Founder & Chairman, WWI.

The veteran folk singer, artist and music composer spoke about the importance of Indian folk music and its role as an integral part of the Indian Cinema and music industry. The undisputed queen of contemporary Indian folk-pop music put on an uninterrupted 90 minutes high-energy performance for the young students in a fully packed auditorium during the 5th Veda session and inspired them to be original. “The only way to be no one else in your creativity is to connect to your own roots and your own self”, said Ila Arun.

Playing his usual best as the host and moderator of the session, Subhash Ghai chatted with the singer bringing out her unique vivaciousness and warm personality. She cited several anecdotes, spoke about multiple aspects of folk-pop as a genre, her journey as a singer, and the dynamics of folk songs in not just Bollywood but Indian cinema at large.

The evening came to a close with a bang as students danced and sang along with the renowned singer to the tune of the famous superhit number ‘Chholi Ke Peechhe’ from Subhash Ghai’s film, Khalnayak, which was the highlight of the evening. Ila Arun also sang her evergreen folk pop number, ‘Dilli Shehar Mein Maaro Ghagro’, leaving the audience mesmerized.