August 22, 2017: Screening of and guest interaction with the team of ‘Lipstick Under My Burkha’ 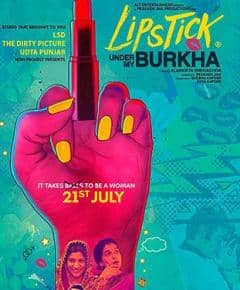 “WWI alumni are thorough professionals & extremely disciplined”, said director Alankrita Shrivastava on her experience while working with them on ‘Lipstick under my burkha’.
Whistling Woods International (WWI) hosted director Alankrita Shrivastava, and the cast and crew of the acclaimed film, Lipstick Under My Burkha for an engaging film forum session. The session was moderated by well-known screenwriter & HOD – Screenwriting, WWI, Anjum Rajabali. The visiting team shared their experiences while making the film. The director along with the members of the cast, Aahana Kumra and Plabita Borthakur, shed light on the filmmaking process and how the audience perceive films that convey a strong social message.

While interacting with the budding filmmakers at WWI, Alankrita Shrivastava said, “During the course of writing and directing a film, filmmakers often become the audience and the critics. As filmmakers we are free to engage in material that speaks to us, which further helps us make a good film.”

She also shared instances from the film and how she fought against all odds, while patiently waiting for the film to hit the silver screen. She admitted, “I can never write for the audience. If something connects to me, I will go ahead and write it for myself. I cannot think from the audiences’ point of view.” She also discussed about how she chose the title of her film, which didn’t involve any culture or sub-culture, and confessed that the title of the film was metaphoric for her.

The session culminated on a high note as Meghna Ghai Puri (President, WWI) thanked the guests and felicitated them with a token of appreciation.