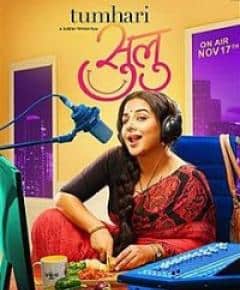 “The Future of the Indian film industry is right here and the future is bright!” Said Vidya Balan during her interaction with students of Whistling Woods International

~ The gifted team of the movie, Tumhari Sulu in conversation with the students of WWI offered specifics and intricacies that went into making the film a blockbuster success ~

Did Tumhari Sulu break barriers of heroism being gender specific? What were the key highlights of the ‘best-marketed film’ of 2017? How did the film come alive from the words narrated in the script? The students witnessed rare insights of filmmaking and much more from the talented team of the film as the first master class of 2018 was held at WWI.

The lead star of the film Vidya Balan accompanied by the director Suresh Triveni, Producers Atul Kasbekar, Tanuj Garg, and Shanti Sivaram Maine shared their experiences of working together to create a film that could resonate with the Indian household perceptions. The masterclass was moderated by Rahul Puri, Head – Academics, WWI.

A veteran, Vidya highlighted, “It’s always great to come back and interact with the gifted bunch of students of Whistling Woods International and it’s a great feeling to see that the future of the film industry is in good hands.”

While discussing the characterization, she mentioned the similarity between the reel and the real life, and how she could connect with the lead protagonist as she herself has always been an eternal optimist. She further added that the magic behind a good script lies in minute details and the role that an observant director plays in showcasing it on screen.

While interacting with the students, Suresh Triveni shared the day-to-day experiences of his growing up years, which lead him to conceive this script. His advice to the students, ”You are accountable for your own dreams. Keep a balance in your life and never compromise on your dreams and passion.”

Atul Kasbekar, retorted ”The concept of heroism in today’s time is changing and I believed that with this film there was a hope to find a hero in the lead protagonist, Vidya Balan, and inspire women from various walks of life.” He also highlighted that students who aim for a career in film production should know the essentials of marketing a film. While answering one of the questions from the intrigued students, he emphasized on how to market a brand effectively without making it look like a forced-fit. Producer, Tanuj Garg, further added promotion outreach through brands give an added benefit as it helps connect with the target audience. His advice to the students was, “Never say no to humble beginnings and always experiment with different things in life.”

This masterclass offered great learning experience as the students got an opportunity to inculcate valuable lessons encompassing various aspects of filmmaking. The session concluded with the team being bestowed with a token of appreciation by Rahul Puri and Meghna Ghai Puri, President, Whistling Woods International.