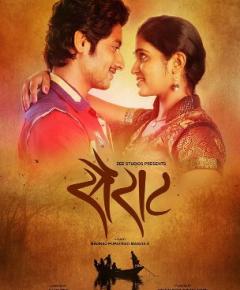 Team Sairat conducted a Masterclass for Whistling Woods International students
A special screening of Sairat followed by a Master Class by director Nagraj Manjule and Producer Nittin Keni was held for the students at the institute’s campus
The students of Whistling Woods International (WWI) were thrilled on Tuesday evening to meet the Director, Nagraj Manjule and Producer, Nittin Keni, the makers of the sensational Marathi film ‘Sairat’, a movie that broke all the records, tested the boundaries and left audience speechless. A screening of the film was witnessed by the students following which was a gripping interaction with Nittin and Nagraj.

Spellbound at the end of movie, students wondered, “What is it that Nagraj Manjule’s movies leave such an impact on the audience, be it the National award winning Pistulya or Fandry or Sairat?”. To answer this, Nagraj narrated an incident from his school days when he was called a fandry (swine in Marathi) by a fellow student. It was the first time he was publically humiliated through an abusive remark linked to his caste. Fandry became the title of his first feature film. Similarly, many parts of Sairat are also inspired by his own life. The captain of the ship also stated, “Sairat is my sublime response to the issues I faced in my life”. “I watched Subhash Ghai films as a fan and today I am here at Whistling Woods”, and quoted ‘films are not merely meant for entertainment, it is a medium to communicate his thoughts with the society’.

Chairman and Founder, WWI, Subhash Ghai, said that he was glad to have the Producer and Director at Whistling Woods International and also said, “I saw the film with my friends and I said to my friends that this will be a blockbuster and it was.” The discussion touched upon the nuances and technicalities involved in the filming process and also issues like casteism, gender equality, classism and honour killing as depicted in the film. The producer on being asked about why he chose to produce the film said ‘’Films like ‘Sairat’ which are made with such conviction must be promoted. More platforms should be created for dauntless storytellers’. He also added that, ‘It’s not the story that I loved, but it was the characters that I fell in love with and that made me to produce the film Sairat.’

The session was packed with a lot of zeal and valuable learnings. In the end of the session Subhash Ghai felicitated the guests with a token of love and appreciation and also congratulated the team on their humungous success.