March 01, 2016: Screening and Guest Interaction with the team of ‘Angry Indian Goddesses’ 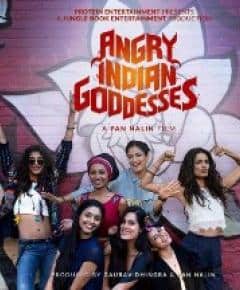 “Fight for your first film,” said Pan Nalin, the director of Angry Indian Goddesses during a masterclass at Whistling Woods International.
The students of Whistling Woods International (WWI) were thrilled to have the team of ‘Angry Indian Goddesses’ for a masterclass held this week. The movie was screened for almost 350 students post which the team comprising of the director Pan Nalin, producer Gaurav Dhingra, editor Shreyas Beltangdy, co-writer Subhadra Mahajan and actor Rajshri Deshpande shared their experiences with the students.

Subhadra spoke about the research she did for the film. One part of the research being the facts from the internet and the other part being one-on-one discussion with several women. It was stories of such women from different strata, with dreams and aspirations that moved them to make this film. To add on, Pan Nalin said, “I didn’t know this would turn out to be the first female buddy film. I just wanted to tell stories that moved me.”

The students were surprised to know that the actors stepped into the characters’ skin and acted spontaneously without a pre-written script. The actors were trained to forget about the camera, which resulted in more natural expressions when the camera was rolled. Nalin believes that actors tend to impose their personal views at times instead of letting the characters to breathe. Hence, asking the actors to live in the characters’ skin would help in impactful portrayal of their respective roles.

It was an extremely proud moment for all the faculty and staff of WWI to hear from Rajshri, who is an alumna of WWI. She shared inspiring experiences and spoke about her journey, beginning right after she graduated from WWI. She motivated the students by quoting, “Prove your talent. Don’t lose hope.” Shreyas enlightened the students on the nuances of editing which included inter cut scenes, pacing and more.

When Gaurav was questioned about shooting under the circumstance of having no locked script, he agreed to the fact that it was a risk but the confidence to keep going came from Nalin. Being the first film distributed on global platform, he also shared his insights on the marketing plans and strategies undertaken for the movie’s distribution.

The entire session left the students amazed and inspired. They thanked the team for sharing their valuable insights.