November 10, 2014: Screening & Guest Interaction with the team of Rang Rasiya 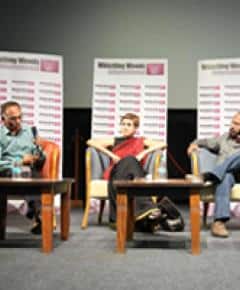 Speaking to the students of Whistling Woods International, Filmcity, at the Master Class, at campus, Randeep Hooda said, “I’ve mostly portrayed the role of an action hero with a gun. And it was really challenging for me to play the role of the legendry artist – Raja Ravi Varma. But I am happy that I did it.” He also complimented his director Ketan Mehta and further added, “Ketan Mehta is one of the original Indian voices in the film industry and I am privileged to work with him.”

Ketan Mehta, award-winning director, producer Deepa Sahi and actress Nandana Sen also participated in the Master Class. The cast and crew shared their experiences of filming the movie, based on the life of Raja Ravi Varma and highlighted various aspects of filmmaking. They also elucidated about how important it is to treat sensitive topics with great care.

Despite being completed in 2008, the movie’s release got delayed owing to its controversial theme and bold content. When questioned about the bold scenes in his film, director Ketan Mehta replied, “There is no shame attached to the human body, it is the most beautiful creation. Shame lies in the mindset. And as a filmmaker, one has to ensure that nudity is contextual and presented aesthetically.”

In true tradition of Whistling Woods’ Master class with filmmakers and their team, students interacted with the team of Rang Rasiya during the question & answer session. Ravi Gupta, Dean, WWI welcomed the Rang Rasiya team, and applauded Ketan Mehta for such an unconventional and artistic movie. He said, “Ketan has always made unique Indian films like Mirch Masala, Mangal Pandey: The Rising and many more. I am glad that he shared his artistic skills with our students at Whistling Woods.”