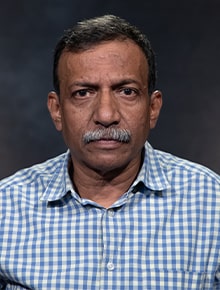 Whistling Woods International (WWI) recently hosted Mr. Anant Rangaswami, Editor of MELT on WION and former Editor of Storyboard, as he conducted an exclusive masterclass for WWI’s School of Media and Communication (SMC). Over the course of an exhilarating session at Asia’s premier film, communication, and creative arts institute, Mr. Anant Rangaswami highlighted the state of advertising in India as it currently stands and detailed his vision for the future of the industry.

The session began with a question on whether the digital space should be considered as a communication medium or a channel. In response, Mr. Anant Rangaswami highlighted the importance of lifelong learning in the pursuit for creativity, and cited the example of legendary adman Sir John Hegarty, founder of global advertising agency, Bartle Bogle Hegarty. “Like everyone here, I am also a student. I learn all the time. John Hegarty is one of the finest creative minds in the world. He wrote in his book that ‘Technology is the handmaiden to creativity’, and that’s something that stuck in my head,” he said. “Technology cannot replace creativity. Digital gives you reach. It gives you some ways of interacting with the consumer, which are new. But what touches the consumer is the idea and the concept. That will not change”, he further elaborated.

The conversation subsequently shifted to industry oversight, and the role and importance of regulatory bodies in advertising. Mr. Anant Rangaswami stressed the importance of such mechanisms, stating, “Every country has an ASCI (Advertising Standard Council of India) equivalent. It is very important because it is a commercial game. There has to be a control over what you make, what you sell in advertising.”

As the session drew to a close, Mr. Anant Rangaswami shared insights on the international standing of the Indian advertising fraternity in terms of storytelling. He stated, “It’s as good as the best in the world. Advertising is fantastic around the world, and India is at par with the best.”

On that uplifting note the session came to an end. As Mr. Anant Rangaswami was presented with a token of appreciation for his invaluable insight, the students expressed their gratitude with a round of thunderous applause.