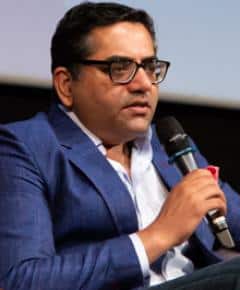 “There is no lack of stories in India but there is a lack of creative writers”, revealed Shekhar Purohit in an insightful masterclass with the students of WWI

Rated among the ‘Top Institutes of Influence’ globally by the Forbes India, Whistling Woods International (WWI) has invariably persevered to provide world-class education. With a cutting-edge academia that caters to various competencies – from Filmmaking and Communication to Media and Design, the institute has always strived to add ‘wings of knowledge’ to the aspirations of the talented youth. In a masterclass with Shekhar Purohit, Co-Founder and CEO, TalentNext.com and Director, Baweja Movies Private Limited, the students of School of Media & Communication got an opportunity to gain insights about the real-time talent acquisition scenario in the entertainment industry.

At the session, Shekhar gave an overview of the talent sourcing methodologies adopted by his team at TalentNext. In a conversation with Rahul Puri, Head of Academics, WWI, Shekhar narrated how the online platform aims to connect talents to the casting community and the corporate goals that the platform practices as an establishment. He explained how the company aimed to work with integrity, assure safety and fundamentally focused on educating individuals. Later in the conversation, Shekhar highlighted the challenges he faced to familiarise and build a network of trust for the talents, subscribing to the platform. He said, “We helped the people understand that we are a platform that is a marriage between Naukri.com and LinkedIn”. In addition, he also discussed the different consumption behaviours of users in India and the U.S towards content generated by the entertainment business. According to him, the major divergence was caused due to the quality of content created. Emphasizing the need for quality content in India, Shekhar helped the students to recognize ‘content-creation’ as a next big opportunity in the market.

Talking about attracting the global market in movie theaters or OTT platforms, Shekhar explained the significance of crisp content creation and different content-structures. While forecasting trends and opportunities in the entertainment business, he shared, “I think content is going to be consumed on an episodic basis, in 7-10 minutes.” In addition, Shekhar educated how content-creation, especially for episodic content, is the need of the hour. He explained, “People who write content in our country today were never groomed to write episodic content. Everybody was groomed to write films.”

As an initiative to bridge the gap of quality content creation in India, Shekhar shared details about ‘Mentoring Writing Labs’ which is a joint venture with professionals from the U.S. Through this platform expert writers will mentor talents in India to upgrade their skill set. Commenting on this initiative, Shekhar revealed, “There is no lack of stories in India but there is a lack of creative-writing talent.”

The session marked its end with an interactive Q and A round with the students. With a burst of cheer and standing ovation, the esteemed dignitary was felicitated with a token of appreciation by Rahul Puri.